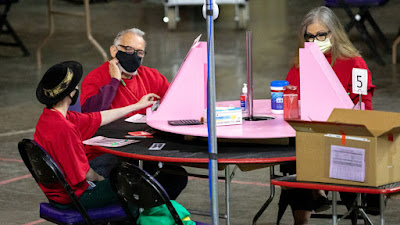 The pawing of 2.1 million 2020 ballots from Maricopa County, AZ for Chinese bamboo fragments and holograms and hell knows what else by deranged Republican Trumpers is over....for now. The frauditors returned the ballots to the control of Maricopa County's board of elections on Thursday:

"Workers at the Arizona State Fairgrounds loaded the ballots onto trucks, which hauled the ballots the 2½ miles back to county property.

For now, all of the ballot boxes will stay in a secure room at the Elections Department that only a few officials from the treasurer's office have access to.

On Monday, officials plan to move the boxes again to the permanent vault in the Treasurer's Office, where they are required to be preserved for two years under federal law, said Elections Department spokesperson Megan Gilbertson."

In an effort to assuage their mentally unstable Dear Leader's bruised and sick ego for having lost Arizona to President Biden, the Republican / Trumpist - controlled legislature ordered the fake audit earlier this year. His cult members are falsely claiming that 275,000 ballots were fraudulent, a claim that's been fact checked and debunked.

In May, the Department of Justice warned the State Senate President and loyal Trumpist Karen Fann that their "audit" may be in violation of Federal election laws, given that the control over the ballots was handed over to a Trump-aligned company "Cyber Ninjas" to manage the fraudit. A proposed door-to-door voter canvassing was also perceived as potential voter intimidation by the Republicans. DOJ has also warned other states about undertaking an Arizona-style fraudit as a potential violation of Federal statutes. So for now the charade has ended, but the lying about the results has just begun.

(photo: "I think I see Jebus' image on this one."  Courtney Pedroza / Getty Images)