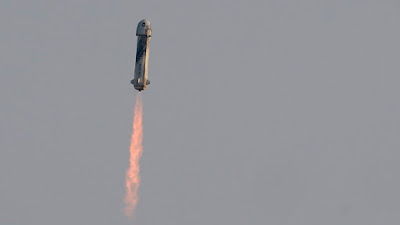 Pardon us for not being in awe over Jeff Bezos' successful private suborbital ego trip into space for a few minutes. Certainly it was nice to give a deserving 82 year-old Wally Funk a ride and to sentimentally name the rocket and vehicle after the U.S.'s first astronaut Alan Shepard for old times' sake.* It's definitely good that everything worked and everyone's safe. But its mission was not to collect data, or conduct experiments, and the flight was controlled from the ground with no participation from the passengers (not a "flight crew"), as a carnival ride would be controlled by the operator. That's what it resembled in a sense: a billionaire's carnival ride complete with the whooping and exclamations from the capsule's giddy passengers during the experience. Of course, at a typical carnival you don't have the breathless and fawning coverage of the rides by our broken media, here seizing on a great new shiny object to cover, made shinier because it involves a mega-billionaire's space fantasy.

The acknowledged goal of Bezos and Co. is to be a major player in commercialized space flight (i.e., "space tourism") so others can fork over their money to Bezos and Co. to experience the thrill, as many will undoubtedly do. One of the ironies of this is that it's well established that Bezos and Amazon pay little or no Federal taxes, which support NASA not to mention our national defense, medical research, national parks, etc.  Bezos made his ride into the wild blue yonder with money he accumulated in part from not paying his share in taxes, and yet we all watch from the ground as he ascends.

* our preferred nicknames were Phallus I, Bezos' Boner, or The Cosmic Compensator

Posted by Hackwhackers at 1:00 PM