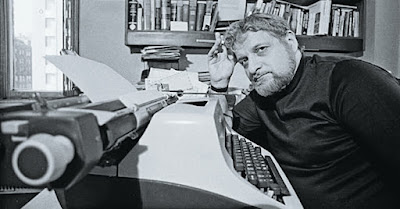 Bronx-born Sydney Aaron "Paddy" Chayefsky was an Academy award-winning playwright, and screenwriter ("Middle of the Night", "Marty," "Network") whose prescient mind imagined the side show that much of television would become. He was a critic of McCarthyism and the Vietnam war, and a strong defender of Israel during his life, which ended 40 years ago today at age 58. Some of his opinions on television and it's influence on our mass culture sadly ring true to this day:

"Television is the menace that everyone loves to hate but can't seem to live without."

"Television is not the truth! Television is a goddamned amusement park. Television is a circus, a carnival, a travelling troupe of acrobats and story-tellers, singers and dancers, jugglers, sideshow freaks, lion-tamers and football players."