Abbott's Empty Stunt At The Border 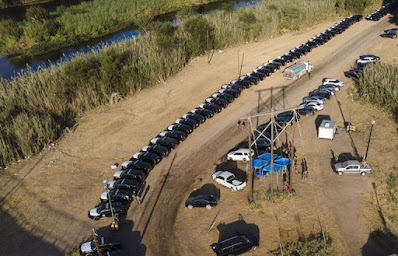 In an effort to stay in the news after passing the despicable anti-women's choice bounty hunter bill, Texas' pathetic wingnut Gov. Greg Abbott decided it was time to impress his rabid anti-immigration voters. So he sent dozens of state-owned vehicles -- mostly law enforcement -- to create a barrier to the Haitians crossing the Rio Grande, despite the fact that deportation of the migrants was well underway. But don't let that stand in the way of a good photo-op for your possible 2024 Presidential run, Governor tough guy.

In the photo above, note the absence of migrants and that the vehicles are parked side-by-side rather than bumper to bumper, which would have created a longer "wall," if that was actually the intent. In reality, the intent was to stage a photo-op and to further intimidate already fearful people who were being herded like cattle to await deportation back to Haiti.