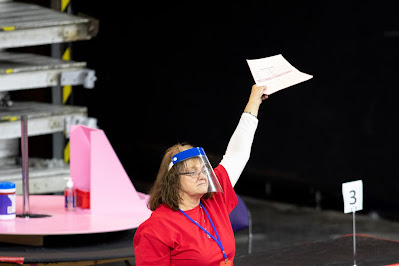 Well, well, what will the malignant loser have to say about this:

A Republican-commissioned review of nearly 2.1 million ballots cast last year in Arizona confirmed the accuracy of the official results and President Biden’s win in Maricopa County, according to a draft report prepared by private contractors who conducted the recount.

The draft was obtained by The Washington Post late Thursday night in advance of a planned public release of a final version on Friday.

The ultimate findings will cap a costly and drawn-out recount commissioned by the GOP-led Arizona Senate that had been championed by former president Donald Trump and kept alive false claims that fraud tainted the election in the state’s most populous county. The process was pilloried by election experts who warned that the methods used by the firm hired to run the review were sloppy and biased.

After nearly six months and almost $6 million — most of it given by groups that cast doubt on the election results — the draft report shows that the review concluded that 45,469 more ballots were cast for Biden in Maricopa County than for Trump, giving Biden 360 more votes than the certified results.

The draft report found the count to have “no substantial differences” from the county’s certified tallies.

So, the Republican fraudit actually found that Biden won more votes than were certified.  (Meaning the "steal" was even bigger than the malignant loser suspected! Bwahahahahahaha!)

Whether this result -- in which even the mightiest efforts by Trumpists to find Chinese bamboo ballots, dead people voting, and purloined ballots failed to overturn the legitimate results -- puts a damper on other Republicans' efforts to cast doubt on the election by running similar fraudits has already been answered:  nope.  Other states, including Wisconsin and Pennsylvania, with anti- democracy Republican legislators already have similar fraudits in the works;  Texas, which went for Trump (!), just announced its own fraudit after it was demanded by... the malignant loser himself. The point of all of them, of course, is not to find "fraud" (because there was none), but to give Republicans cover to carry out their voter suppression/ election nullification plans.

How much longer do we have to wait before we get federal voting rights legislation passed to put an end to all this b.s.?

Even though I didn’t vote for him… Newsflash: Biden won. pic.twitter.com/lBGUhDiUaX

(Photo: "Wait, I think I found some Chinese bamboo!")

It's been striking that even though the "official" date for the release of the "results" of the "audit" (Sept 24) was announced more than a week ago, almost none of the right-wing sites and blogs I read have been covering it at all. This has dragged on for so long that even most of them seem to have lost interest.

The exception is Gateway Pundit, which has been hyping it like crazy. Their comment threads early this morning, when this information leaked (it's actually a draft, with the real report being due at 1:00 PM Pacific time today) were a wonder to behold. People were desperately clinging to the hope that the real report will be different from the draft, or that large numbers of ballots will be revealed as fakes, so they can still have the revolution, mass executions of election officials, reinstatement of Trump, etc that they've been hoping for all along. Of course, no matter what the final report says, if even most of the wingnutosphere is not paying any attention, I doubt anyone else will.

But the crazies are already speculating that Cyber Ninjas is part of the deep state, in on the big steal conspiracy, etc. Probably nothing will ever convince them the election was legitimate.

Infidel -- they're so far down the rabbit hole, there's no coming back. The true believers, the elected Trump enablers jumping at his command, etc., are a destabilizing force that will continue to undermine our democracy for years to come.

$6M. Really need to get on the agrieved voter grifter train. Maybe solicite funds for a private wall along the Canadian border?

Mart -- it's the grift that keeps on taking!