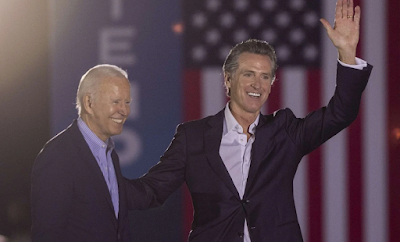 Californians were asked two questions: Should Newsom be removed, and if so, who should replace him? About 66% of voters answered “no” to the first query, according to data from the Secretary of State as of late Tuesday, with more than half of votes counted. The governor was elected in 2018 with about 62% of the vote.

The margin of victory in the recall was a “whupping,” said David McCuan, chair of the political science department at Sonoma State University. He said a difference of 15 to 20 points would have been considered a landslide.

“They wanted a smackdown of the Republicans, and that’s what it looks like they did,” McCuan said. (our emphasis)

Here's the landscape with 66% of the votes counted as of 7:35 EDT this morning: 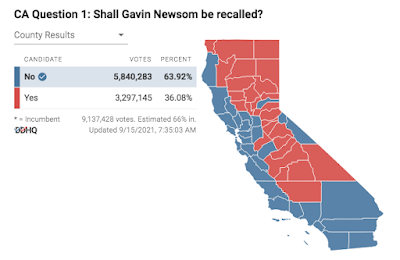 The recall election is expected to have cost taxpayers in California more than $300 million.

Now, Californians must fix the broken recall process so that it becomes much harder for a radical political movement representing just a fraction of the electorate to grab power. Democrats dodged a bullet this time, but may not be so lucky again.

Tonight, California voted NO on the recall and YES to…
Science.
Women’s rights.
Immigrant rights.
The minimum wage.
The environment.
Our future.

We rejected cynicism and bigotry and chose hope and progress.