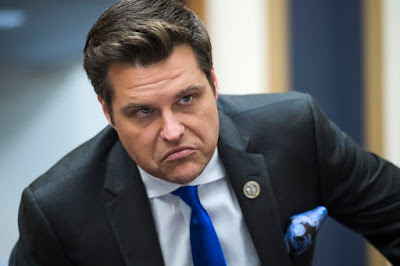 Alleged sex trafficker and far-right Trumpist towel boy Rep. Matt "Teen Spirit" Gaetz (Sedition - FL) is reportedly hiring big- time criminal defense lawyers experienced in sex crime cases, which suggests that he wants to battle the charges against him in court rather than seek a settlement:

It seems that Gaetz and his friends have assembled a legal team that's familiar with representing the biggest criminal dirtbags, which  seems altogether appropriate. The bottom line is that it's an indication of how dangerous he thinks the charges are against him, and how he'll need more legal firepower than what's available in his district. Attorneys and former prosecutors believe that Gaetz will employ the "scorched earth strategy" of a combative trial rather than plea bargain:

“'The fact he’s hiring trial lawyers would suggest that they are preparing for a trial, not a negotiation. But it’s not unusual for a trial lawyer to go above a prosecutor into the DOJ to make their plea on behalf of their client,' [former Federal prosecutor Jill Wine-Banks] said. 'That said, I can’t think of any time that happened to me in my experience, where a decision not to indict was made because of a meeting.'”

Gaetz is the entitled son of a wealthy former health care provider CEO and Florida politician whose previous scrapes with the law include 16 speeding tickets and a 2008 arrest for driving under the influence of alcohol. He's used to having his family wealth and political connections get him out of legal problems, and he's counting on it working again this time.