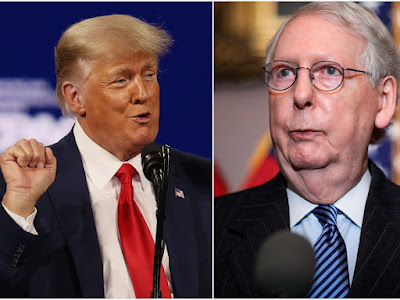 Ever since master obstructionist and human/turtle hybrid Sen. Moscow Mitch McConnell ruefully admitted that his Dear Leader, demagogue and mentally unstable sociopath Donald "Loser" Trump lost the 2020 election to President Biden, he's been on the Loser's vengeance list. Also, McConnell blames Trump for losing the two Senate seats in Georgia, thus making him the Senate minority leader, and for the seditionist riot at the Capitol on January 6.

The latest development is a report originally in the Wall Street Journal yesterday that Trump is actively trying to recruit a challenger for McConnell's leadership position, and so far has had no takers. That's because, above all, Moscow Mitch is a noted survivor of attempts on his political life, both in Kentucky and in Washington, DC.  Someone who should know what Trump is up against is Republican hack and former McConnell aide Scott Jennings, who appeared on CNN's "New Day" this morning to discuss the story:

"What I thought was telling about the Wall Street Journal article, was that not a single person would take Donald Trump up on his offer. Even Mo Brooks, perhaps the Trumpiest candidate out there, wouldn't take him up. Josh Mandel in Ohio wouldn't take him up on it. And the sitting members of the Republican conference that they interviewed all said Mitch McConnell is doing a good job, and John Kennedy of Louisiana said this is like trying to teach a donkey how to fly.

The reason McConnell has been successful at getting elected leader, and when he has elections in Kentucky, is because he always has a plan. Donald Trump never has a plan and thinks he can speak these things into existence. But I would just say that McConnell has never lost an election, ever. He's never been beaten in Kentucky and he's never lost a leadership election. Donald Trump of course has tried twice and has gotten fewer votes than his opponent twice. So in a head to head matchup here on a leadership election, I think Mitch McConnell has a track record that tells us he'll be elected leader again if he'd like to be."  (our emphasis)

Of course, we have yet to hear from the ambitious insurrection promoter and Trump idolater, the execrable Sen. Josh Hawley (Sedition-MO). That said, an internal party struggle before the 2022 elections would be most welcome, and it might as well be about which of these two despicable leaders will prevail.