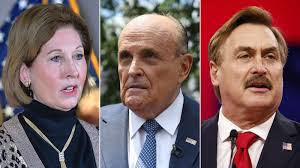 Former President Donald Trump’s campaign was aware that some of its claims about fraud in the 2020 election were false, according to an internal memo that was just made public.

The New York Times reported that the memo was released Monday night as part of a defamation lawsuit against the Trump campaign from Eric Cooper, a former employee of Dominion Voting Systems.

The company has been the subject of a torrent of conspiracy theories and false claims regarding the 2020 election. Cooper, as well as Dominion and another voting systems company called Smartmatic, have all launched defamation lawsuits against proponents of those claims.

According to the Times report, the Trump campaign crafted an internal memo acknowledging that its legal team’s allegations against Dominion and Smartmatic were false. The document was put together before the infamous Nov. 19 press conference in which Trump lawyers Sidney Powell, Rudy Giuliani and Jenna Ellis pushed a series of insane conspiracy theories about the election, suggesting the campaign “sat on its findings.”

It's fortunate that Dominion and Smartmatic brought these defamation suits, otherwise such damning facts might never have been discovered.  As the process works its way to the end, they deserve as much compensation as they can squeeze from the sleazeballs already named, as well as from any other persons or organizations that were involved in giving this Big Lie legs.

A certain un-indicted co-conspirator may also have vulnerability due to the surfacing of these documents:

If (it’s not clear from this story), Trump was also in the loop on this, it will dramatically impact his position in civil cases over Jan 6 brought against him by Capitol Police & @RepSwalwell & potentially, even, proof of mens rea in a criminal case. https://t.co/v5wQfYO07K

The facts wouldn't have mattered to Trump either way, of course.  His delusions are such that it's impossible for him to admit to himself that he could have lost the election.  But Trump potentially facing more legal jeopardy is an outcome to be welcomed.