Trump's Fascists Coming Back To DC 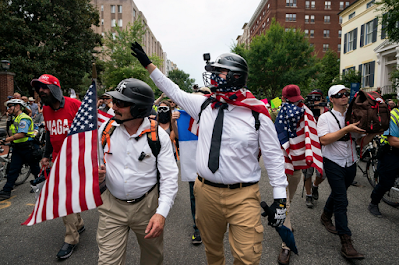 Washington, DC, and specifically the Capitol, is gearing up for the return of the malignant loser's fascist loser followers on September 18.  Here's what's being reported about preparations stemming from a Capitol Police assessment:

The intelligence assessment, dated Sept. 7, notes that in recent days, the department and partner agencies have found more violent online talk surrounding the #JusticeForJ6 rally, organized by Look Ahead America. The event seeks to support pro-Trump rioters who were jailed for their roles in the Jan. 6 Capitol attack.

A discussion thread on the far-right site 4chan includes calls to “do justice” against “local jews and corrupted officials.” It also says the demonstration should be used as a vehicle to participate in violent acts against local “Jewish centers and Liberal churches” while law enforcement is distracted.

Another comment from the thread reads, “I will be there with my AR15 even though legally I can’t have one f*** the Demonrats.” (ed. note: asterisks inserted by CQ Roll Call)

Look Ahead America, a group led by former Trump campaign employee Matt Braynard, asked for a permit in Union Square at noon on Sept. 18 for 700 participants, a number that has risen from 500. [snip]

The Capitol Police assessment references the [Justice for January 6] Twitter account, which posted an apparent depiction of Babbitt draped in a “Kekistan” flag with a Kek logo halo in the background. The Southern Poverty Law Center describes Kek as a “tribal marker of the alt-right.”

The department’s intelligence memo notes that the image’s symbolism “appears to suggest that adherents to the far-right ideology view Babbitt as a martyr for their cause and it may be possible that these individuals are more inclined to attend events that appear to be memorializing her or the January 6th insurrection.”

The J4J6Campaign Twitter account uses a design similar to the Blood Drop Cross, a symbol the department notes is used by the Ku Klux Klan. The account also has a “faint stylized version of the Celtic Cross which is commonly used by neo-Nazis and white supremacist extremists,” according to the assessment.

The document makes note of some interest shown in the event by far-right extremist groups like the Proud Boys and White Lives Matter.

The white supremacist, anti-Semitic sub-morons *shouldn't* be catching local authorities by surprise like they did on January 6, but it's always possible the fascists have developed new tactics that will require quick and effective responses by those authorities.  (A counter demonstration is also planned, which should increase the chance that violence will break out.)  It will be revealing to see how police handle any violent or provocative acts by the fascists this time around, after the insurrection of January 6 showed that the mob was only interested in "backing the blue" as long as it meant keeping minorities and "the left" in their place.