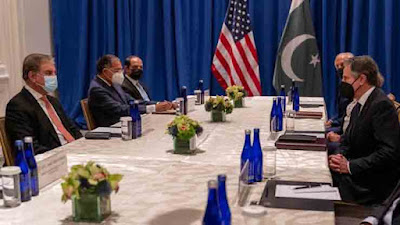 The rapid collapse of Afghanistan's army and corrupt government in the aftermath of the Trump-negotiated pull out with the Taliban not only handed the country to the Taliban. It added to the influence of its neighbor Pakistan, a rogue "ally" of the U.S. which seldom acts as one. As early backers of the Taliban before they were rooted out by U.S. forces two decades ago, Pakistan further diminished its stock with the West after Osama bin Laden was discovered hiding there in 2011. For it's part, they've seen the U.S. draw increasingly closer to their main adversary India over the past 20 years, most recently in the establishment of the "Quad" security arrangement with the U.S., India, Japan, and Australia.

The U.S. is engaging with Pakistan now to use whatever influence it has on the regime of Pakistan's leader Imran Khan to have a moderating influence on the Taliban, whose leaders are reportedly close to Pakistan's intelligence service. It's not a good sign that Khan, in his remarks to the UN General Assembly yesterday, blamed the U.S. for being "ungrateful" for Pakistan's support in the war on terror. Pakistan wants U.S. economic and military aid, and a lessening of its relations with India, while the U.S. wants Pakistan to use its influence on the Taliban and to allow military operations, including drone flights, over Pakistan.

For 20 years and more, U.S. officials describe Pakistan as playing a "double game" with us and our adversaries in that part of the world. Now that Pakistan has a virtual "client state" in Afghanistan, it remains to be seen if the game will change.

The quote marks around "ally" referring to Pakistan are well merited. The government there, especially the intelligence service, has long been infested with radical-Islamist and terrorism-supporting elements which the rest of the leadership either can't or won't bring under control. This has extended to attacks by Pakistan-based terrorist groups on India's parliament building, a hospital in Mumbai, and other targets at various times. In recent years Pakistan has been cozying up to the Chinese fascist regime, making it one of the latter's few allies. We have little need of "friends" like this.

India is an emerging major power and a stable secular democracy (it's true that Modi has shown some religio-nationalist tendencies, but India's democracy will survive him as ours survived Trump), and thus a much more appropriate partner for us to work with. Pakistan has been providing the Taliban with clandestine assistance for years and is never going to be reliable in helping us against them. Like the even more vile Saudi regime, they are a viper in the bosom.

One of the last real briefings I read before retiring from the military was the utter terror intelligence people had about Pakistan and its nuclear arsenal. Yeah, I know the United States has "lost" a few nukes and that after the collapse of the Soviet Union there were fears that both weapons and nuke material could get stolen from them and end up used by terrorists.

But everything I read says that there are elements in the Pakistan military that would easily lose a weapon for money or just shits and giggles if the intended target was on that faction's shit list.

Modi sucks but I'd rather have a cozy relationship with India than that nuthouse called Pakistan.

Infidel -- Good background on Pakistan and their malign activities in the past. Better to cast our lot with a government that at least has a democratic tradition and values. Thanks.

Beach Bum -- You're right, it's a nuthouse with nukes in the hands of some of the most untrustworth people we can imagine. Thanks for your perspective.