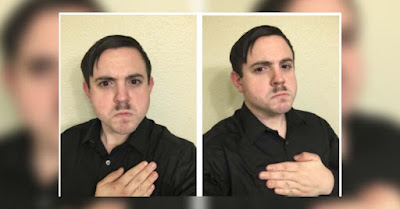 After his arrest earlier this year on charges that he illegally entered the Capitol during the January 6 Trumpist insurrection and harassed police officers, Hitler mustache-wearing Timothy Hale-Cusanelli was demoted from sergeant to private and given an "other than honorable discharge" from the Army. Hale-Cusanelli frequently spouted virulent, anti-Semitic hate while working as a civilian at the Naval Weapons Station Earle in New Jersey:

"Navy investigators interviewed 44 of his colleagues, including Navy personnel and fellow security contractors, about his behavior at work. All but 10 described Hale-Cusanelli as 'having extremist or radical views pertaining to the Jewish people, minorities and women,' prosecutors said.

Several colleagues told investigators about his wearing of a 'Hitler mustache' while at work, court papers show. Among them was a supervisor, who said Hale-Cusanelli was admonished because of it. One sailor told investigators that he heard Hale-Cusanelli say that if he were a Nazi, 'he would kill all the Jews and eat them for breakfast, lunch and dinner, and he wouldn’t need to season them because the salt from their tears would make it flavorful enough,' according to the court filing." (our emphasis)

It's not surprising that this loser was among the extremist right-wing dregs that showed up for malicious loser Donald "Big Lie" Trump's January 6 attempt to violently overturn the election. What is surprising is that this sick nutjob held a secret security clearance from the Government.

Hale-Cusanelli's lawyer is seeking a reversal of his demotion and discharge, since it will mean financial and benefits loss to him. Big boo-effing-hoo. His trial for his role in the January 6 insurrection is scheduled for May, and he fortunately remains in Federal custody.

(photo: Sieg Hale-Cooch! Wonder how many dates he gets. Via DOJ)

Labels: Hitler fan and Jan. 6 rioter wants to be reinstated in Army