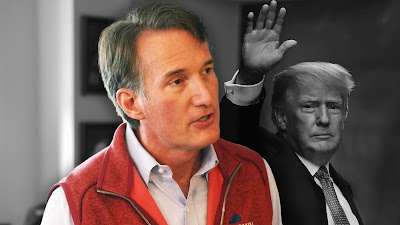 The Washington Post editorial board delivered a stinging rebuke to mega millionaire Glenn Youngkin, the slippery Trumpist candidate for Governor of Virginia, in this morning's paper. Here is their summation (but read the whole editorial):

"When asked by a hopeful GOP voter whether the courts might reverse the 2020 election results, Mr. Youngkin dodged, saying that courts move slowly and 'it’s unclear' whether they might reinstall Mr. Trump as president. When another voter asked about fraudulent ballots cast by dead people — another falsehood popular among Republicans — Mr. Youngkin offered sympathy and tacit agreement, urging tighter voting rules and pledging as governor to 'make some reforms.'

This is not an everyday campaign dispute. We might disagree with Mr. Youngkin on Medicaid expansion, say — he termed it 'sad,' though it extended health insurance to hundreds of thousands of Virginians who lacked it — without arguing that his stance is disqualifying. But at a moment when democracy itself is under assault, Mr. Youngkin chose to dignify a fundamental fiction that is subverting our system, rather than stand up squarely for the truth. In so doing, he proved himself unfit for office."  (our emphasis)

Despite his Trumpist positions, Youngkin has tried to come across as an affable, suburban dad in his smarmy and dishonest ads, which are filling the airwaves in the Washington suburban region. November 2 is election day, and early voting in Virginia closes on Saturday, October 30. This election is of national importance in that it will signal 10 months after the January 6 insurrection whether voters take the continuing threat to our democracy based on the "Big Lie" seriously and reject its local proponent, Glenn Youngkin.

Labels: Quote of the Day II, WaPo deems Youngkin unfit to be governor of VA