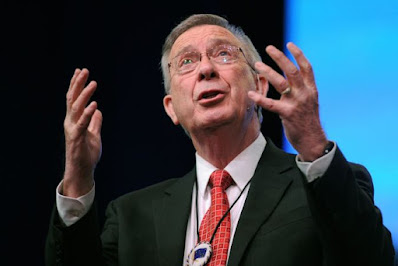 A report in Politico gives new evidence that the right-wing fundamentalist Liberty University, founded by the despicable Jerry Falwell, should be stripped of its tax exempt, 501[c][3] status. For those who have watched the Republican-front "University" shill for Republican candidates for years, it should come as no surprise. Now a recording of the school's President, Jerry Prevo, in a conversation with a former official of the school, provides the smoking gun:

"Prevo, a 76-year-old retired pastor of a large Alaskan church, told Scott Lamb, then the university’s senior vice president for communications and public engagement, that he wanted the university’s internal “think tank” — previously the Falkirk Center, now the Standing for Freedom Center — to become more effective at political activity.

'Are they getting people elected? Which is one of our main goals,' Prevo told Lamb during a call that Lamb surreptitiously recorded and provided to POLITICO. 'Are they really motivating our conservative people to really get out to vote? If they are, we ought to be seeing some changes in elected officials — and we are to some extent. All I want to do is to make us more effective.'” (our emphasis)

IRS rules state that organizations like religious schools which claim tax exemption cannot engage in political activities. Prevo obviously knows that, as he arrogantly told Lamb on the recorded call:

"'I have a 501c3 church,' Prevo said in response, according to the recording. 'For 30 years, I’ve known how to handle that and not get into trouble. The homosexual community has tried to take me down for at least 30 years, and they have not been successful because I know how to work the 501c3.'”  (our emphasis)

This front for conservative Republican politics should be forced to pay taxes as a non-religious entity engaged in political activities. This will be a good test for the Biden Administration and Treasury Secretary Janet Yellin.

Posted by Hackwhackers at 3:00 PM

I'm not sure and don't give a big enough of a shit to look - but I don't believe only a very few whatever have had their tax exempt status ever taken away. The IRS could on their own but of course they haven't and they won't. This is one it's fair to say Both Sides are in on.

It does seem unrealistic to expect people to follow rules with which they clearly disagree then these rules are almost never enforced. It would be nice to see more of these groups lose their tax-exempt status, but that would be a major change.