Photo Of The Day: March For Voting Rights 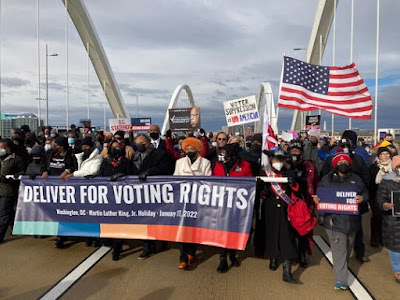 Hundreds of marchers calling for the strengthening of voting rights in the face of Republican attacks marched across Frederick Douglass Memorial Bridge in Washington, D.C. today. The march was led by Martin Luther King III and other members of Dr. King's family, including 13 year old Yolanda Renee King, who spoke about the urgency of passing voting rights legislation and suspending the filibuster to do so.

Last Saturday, the King family marched for voting rights in Phoenix, AZ, the home state of flaky filibuster friend Sen. Kyrsten Sinema, who has declared her opposition to dropping the Senate's filibuster rule in order to pass voting rights legislation, which is opposed by every single Republican / New Confederate / Active Shooter Party senator.

Labels: MLK Jr. march in Washington calls for voting rights legislation to be passed, photo of the day, voting rights