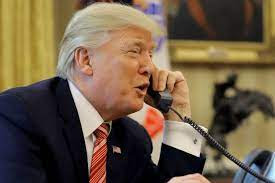 The Atlanta area prosecutor weighing whether former president Donald Trump and others committed crimes by trying to pressure Georgia election officials has been granted a special purpose grand jury to aid in her investigation.

Fulton County Superior Court judges on Monday approved the request made last week by Fulton County District Attorney Fani Willis and said she will be allowed to seat a special grand jury on May 2, the Atlanta Journal-Constitution reported.

The special grand jury can continue for a period “not to exceed 12 months,” Christopher Brasher, chief judge of Fulton County Superior Court, wrote in an order.

“The special purpose grand jury shall be authorized to investigate any and all facts and circumstances relating directly or indirectly to alleged violations of the laws of the State of Georgia, as set forth in the request of the District Attorney referenced hereinabove,” he added. “The special purpose grand jury … may make recommendations concerning criminal prosecution as it shall see fit.”  [snip]

In a letter last week, Willis, a Democrat, told the chief judge of Fulton County Superior Court the move was needed because a “significant number of witnesses and prospective witnesses have refused to cooperate with the investigation absent a subpoena requiring their testimony.”

Willis cited Georgia Secretary of State Brad Raffensperger (R) as an example. Willis has previously confirmed that part of her investigation centers on the Jan. 2, 2021, phone call between Trump and Raffensperger in which Trump asked Raffensperger to “find” enough votes to overturn Joe Biden’s win in the state’s presidential election.  [snip]

At one point during his call with Raffensperger, Trump told him, “All I want to do is this. I just want to find 11,780 votes, which is one more than we have. Because we won the state.”  (our emphasis)

This case provides perhaps the most irrefutable, smoking gun evidence of the Malignant Loser's personal efforts to overturn the results of the 2020 election, since Raffensperger had the sense (good luck?) to record the conversation. But, as we're learning, it was a multi- front attack that relied on pressure on other states' governors and legislators,  frivolous lawsuits, filing fraudulent Malignant Loser slates of electors in several states, a "how- to" memo for staging a coup during the electoral vote count, and a Malignant Loser rally and media campaign that riled up the low- information/ high- grievance base that showed up at the Capitol on January 6, 2020, to stop the count of state electoral votes.