The Hardcore Fascist That Putin Follows 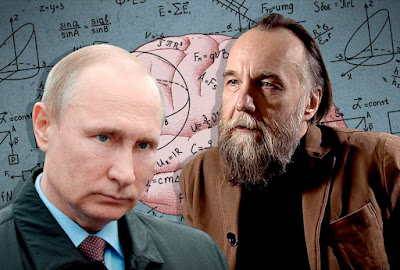 We wrote Monday about Russian thug and war criminal Vladimir Putin's "schizo-fascism" as described by Yale historian Timothy Snyder. His war crimes in Ukraine of deliberately targeting civilian sites are reminiscent of Russia's actions in Chechnya, Syria, and even Nazi Germany's scorched earth attack on Poland and Russia over 80 years ago.

Writing in today's Washington Post, columnist David Von Drehle identifies the man who has exercised the most influence over Putin's political philosophy and world view, a delusional, messianic fascist by the name of Alexander Dugin, i.e., "Putin's brain":

"A product of late-period Soviet decline, Dugin belongs to the long, dismal line of political theorists who invent a strong and glorious past — infused with mysticism and obedient to authority — to explain a failed present. The future lies in reclaiming this past from the liberal, commercial, cosmopolitan present (often represented by the Jewish people). [snip]

Dugin tells essentially the same story from a Russian point of view. Before modernity ruined everything, a spiritually motivated Russian people promised to unite Europe and Asia into one great empire, appropriately ruled by ethnic Russians. Alas, a competing sea-based empire of corrupt, money-grubbing individualists, led by the United States and Britain, thwarted Russia’s destiny and brought “Eurasia” — his term for the future Russian empire — low.

In his magnum opus, “The Foundations of Geopolitics: The Geopolitical Future of Russia,” published in 1997, Dugin mapped out the game plan in detail. Russian agents should foment racial, religious and sectional divisions within the United States while promoting the United States’ isolationist factions. (Sound familiar?) In Great Britain, the psy-ops effort should focus on exacerbating historic rifts with Continental Europe and separatist movements in Scotland, Wales and Ireland. Western Europe, meanwhile, should be drawn in Russia’s direction by the lure of natural resources: oil, gas and food. NATO would collapse from within."  (our emphasis)

Von Drehle notes the similarities in Putin's often rambling, ahistorical and ultra-nationalistic speeches and Dugin's warped writings, and it's chilling that this modern day Rasputin would be echoed by the head of a state armed with nuclear, chemical and biological weapons and apparently not hesitant to use them.

In an interesting and ironic twist, part of Dugin's look into the "geopolitical future of Russia" envisions the fragmentation and decline of current Russian ally China, and a partnership with.... Japan. You can always count on fascists betraying you. Just don't tell Xi Jinping.