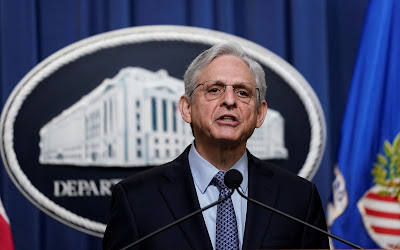 Confounding skeptics everywhere (including us at times), the Department of Justice is revealing that it has a wide-ranging criminal investigation of the January 6 insurrection:

The Justice Department has asked the House committee investigating the Jan. 6 attack for transcripts of interviews it is conducting, which have included discussions with associates of former President Donald J. Trump, according to people with knowledge of the situation.

The move, coming as Attorney General Merrick B. Garland appears to be ramping up the pace of his painstaking investigation into the Capitol riot, is the clearest sign yet of a wide-ranging inquiry at the Justice Department.

The House committee has interviewed more than 1,000 people so far, and the transcripts could be used as evidence in potential criminal cases, to pursue new leads or as a baseline text for new interviews conducted by federal law enforcement officials. [snip]

The Justice Department’s investigation has been operating on a separate track from the committee’s work. Generally, investigators working on the two inquiries have not been sharing information, except for at times communicating to ensure that a witness is not scheduled to appear before different investigators at the same time, according to a person with knowledge of the inquiries.

Thus far, the Justice Department’s investigation has focused more on lower-level activists who stormed the Capitol than on the planners of the attack. But in recent weeks, Mr. Garland has bolstered the core team tasked with handling the most sensitive and politically combustible elements of the inquiry.

Several months ago, the department quietly detailed a veteran federal prosecutor from Maryland, Thomas Windom, to the department’s headquarters. He is overseeing the politically fraught question of whether a case can be made related to other efforts to overturn the election, aside from the storming of the Capitol. That task could move the investigation closer to Mr. Trump and his inner circle.

A subpoena reviewed by The New York Times indicates that the Justice Department is exploring the actions taken by rally planners. [snip]

Prosecutors have begun asking for records about people who organized or spoke at several pro-Trump rallies after the 2020 election as well as anyone who provided security at those events, and about those who were deemed to be “V.I.P. attendees.”

They are also seeking information about any members of the executive and legislative branches who may have taken part in planning or executing the rallies, or tried to “obstruct, influence, impede or delay” the certification of the election, as the subpoena put it.  [snip]

Mr. Garland and his top aides have been careful about not disclosing their investigative methods, and they have sought to emphasize their impartiality in limited public comments about the investigation.

“We investigate conduct and crimes, not people or viewpoints,” the deputy attorney general, Lisa O. Monaco, said last week during an interview at the University of Chicago.

“We follow the evidence,” she added. “It is very important to do that methodically.” (our emphasis)

More at the link.

The DOJ letter's language seeking information on anyone who obstructed, influenced, impeded or delayed the certification of the election reflects the fact that this is a criminal investigation since that parrots language in 18 U.S. Code § 1512, a felony statute (as Rep. Liz Cheney pointed out way back in December 2021).

For those of us who've been asking "Where's Merrick Garland and the Justice Department?" they just gave us their answer.

UPDATE:  Though, if given an opportunity to fuck things up in the name of process and procedure, count on Democrats to be all in.