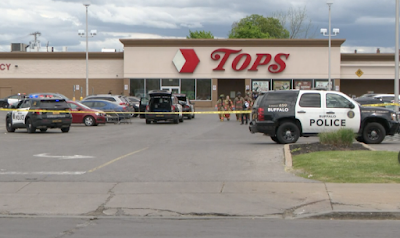 What's known so far about the shooter who traveled hundreds of miles to kill 10 people and wound 3 others, 11 of them Black, in a grocery store in Buffalo, NY, today:

The suspect in a Buffalo mass shooting reportedly live streamed the massacre on Twitch and posted a 106-page manifesto pushing a racist conspiracy theory prior to the attack.

"A man has opened fire at a supermarket in Buffalo, New York while live-streaming on Twitch, killing at least 10 people and injuring several others, local officials and witnesses say," BNO News reported Saturday. "A 106-page online manifesto, believed to have been uploaded by the shooter, explained that he was motivated by a conspiracy theory that white people are being replaced by other races. In the document, he says he is 18 years old and a self-described white supremacist and anti-semite."

J.J. MacNab, a researcher at George Washington University program on extremism, studied the 106-page manifesto allegedly posted by the shooter.

"He self identifies as a white supremacist fascist with Neo-Nazi beliefs who is anti "high fertility immigrants" under the white replacement theory. There are several 4chan markers," she explained. "He states that he was radicalized online on 4chan and was inspired by Brenton Tarrant's manifesto and livestreamed mass shooting in New Zealand."

Anti-racism educator Tim Wise says those who push racist conspiracy theories are to blame for the inevitable violence that ensues.

"The Buffalo shooter's manifesto rants about immigration & white birthrates, both of which feature prominently in mainstream conservative & MAGA rhetoric. And he embraces an explicitly accelerationist rationale for violence...hoping to cause further strife and societal collapse... Those who spread these ideas are to blame, not just the ones who pull the trigger," he explained. "There is nowhere else replacement theory rhetoric and logic can lead except for violence. It is inevitable..."

"Another white supremacist terrorist has committed mass murder, inspired by the 'great replacement' thinking pushed regularly by Tucker Carlson and others on the right. Blood is on their hands, 100%," Wise said. "The white supremacist groups peddling this sh*t like the Groyper/Nick Fuentes/America First bigots, need to be sued out of existence for inspiring this terrorism. Vicarious liability. End them." (our emphasis)

We have other, harsher ideas about what should be done to these fascists.

UPDATE:  The shooter has been identified as Payton Gendron, 18, of Conklin, N.Y.