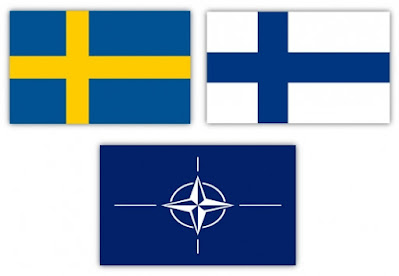 In a widely anticipated move, Sweden's leaders have formally confirmed that Sweden intends to join neighboring Finland in applying for NATO membership. Sweden's membership in the NATO alliance would effectively end roughly 200 years of its neutrality, brought on my the unprovoked and brutal invasion of Ukraine by Putin's Russia:

"Prime Minister Magdalena Andersson called it 'a historic change in our country’s security policy' as she addressed lawmakers in the Swedish capital.

'Sweden needs formal security guarantees that come with membership in NATO,' Andersson said, adding that the country was acting together with Finland, whose government announced on Sunday it would seek to to join the alliance.

'The Swedish government’s intent is to apply for NATO membership. A historic day for Sweden,' Foreign Minister Ann Linde wrote on Twitter. 'With a broad support from political parties in the parliament, the conclusion is that Sweden will stand stronger together with allies in NATO'.”

Andersson's own Social Democratic Party dropped its long-standing opposition to joining the western alliance, giving the decision wide political support. Meanwhile, negotiations among the foreign ministries of Turkey, Sweden and Finland are ongoing to resolve Turkey's qualms about their "support" of Kurdish militants and export bans on Turkey. Acceptance to NATO has to be approved by all 30 member nations.

Russia's Deputy Foreign Minister Sergei Ryabkov was bellicose today in his reaction to the imminent moves by the Nordic nations:

"They [NATO] should not have any illusions that we will simply put up with this—in Brussels, Washington, and other NATO capitals. That is, the general level of military tension will increase, and there will be less predictability in this area."

Russia has already cut off its electric supply to Finland, which Finland has been preparing for along with other situations as Russia retaliates and proves why NATO is essential to containing Russia's ambitions.