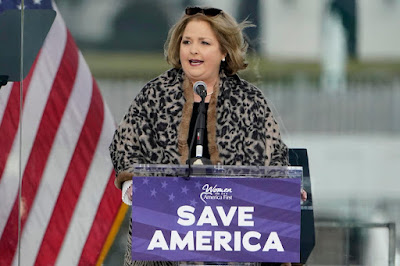 Amy Kremer, deadbeat head of the Trumpist "Women for America First," one of the organizers of the January 6 "rally" that instigated the attack on our democracy, has words for her cult leader over his betrayal of far-right Rep. "Mo No Mo" Brooks (Sedition-AL):

“Donald Trump is disconnected from the base. I don’t know what has happened there. I think he’s getting bad advice from the people around him, and I think it’s unfortunate, but it’s time for those of us in the movement to get back to basics, back to our first principles.

We were here long before President Trump came along, and we’re going to be here long afterward.'” (our emphasis)

As more of the Malignant Loser's "Big Lie" crimes are introduced to the broader public, and as he interferes in state and local elections ranting about 2020, expect his stock to fall further as vultures like Florida's fascist Gov. Ron "One Glove" DeSantis wait in the wings.