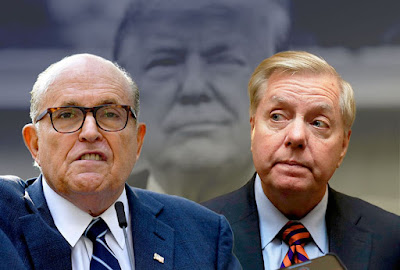 Members of the Malignant Loser's corrupt election fraud team have been subpoenaed by the Fulton County, GA grand jury looking into the Georgia election tampering case. Trump's deranged scotch-swilling consigliere and slip-and-fall fraudster Rudy "Toot Toot" Giuliani and South Carolina's own mama's boy Sen. Lindsey "Huckleberry" Graham have been subpoenaed to tell what they know about the Malignant Loser's call to Georgia election officials in which he asked them "to find 11,780 votes" that would win the state for him.

Graham is reported to have called Georgia Secretary of State Brad Raffensperger asking him whether he had the power to throw out mail ballots in specific (i.e. black majority) counties. Graham was likely inquiring on behalf of the Malignant Loser.

The Georgia election fraud case is probably going to be the first felony case brought against Trump given the Malignant Loser's call was taped and his intent was clearly to defraud the voters of Georgia. It's potentially the most dangerous to him short term. As a state-charged crime, there is no immunity or pardon power available to the President, current or future.

What about a governor of Georgia? Can he/she pardon Trump?

Unknown -- only the State Board of Pardons and Paroles in Georgia has authority to grant pardons.