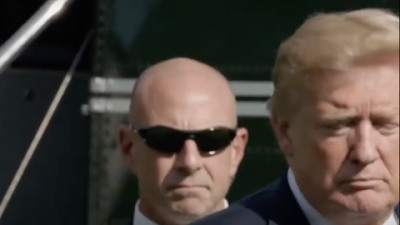 Attempts by Trumpworld (including some in the Secret Service) to cast doubt on the testimony of former Mark Meadows aide Cassidy Hutchinson regarding the Malignant Loser's unhinged behavior on January 6 just took a big hit:

Then-President Donald Trump angrily demanded to go to the US Capitol on January 6, 2021, and berated his protective detail when he didn’t get his way, according to two Secret Service sources who say they heard about the incident from multiple agents, including the driver of the presidential SUV where it occurred.

The sources tell CNN that stories circulated about the incident – including details that are similar to how former White House aide Cassidy Hutchinson described it to the House select committee investigating January 6 – in the months immediately afterward the US Capitol attack and before she testified this week.

While the details from those who heard the accounts differ, the Secret Service sources say they were told an angry confrontation did occur. And their accounts align with significant parts of Hutchinson’s testimony, which has been attacked as hearsay by Trump and his allies who also have tried to discredit her overall testimony.

Like Hutchinson, one source, a longtime Secret Service employee, told CNN that the agents relaying the story described Trump as “demanding” and that the former President said something similar to: “I’m the f**king President of the United States, you can’t tell me what to do.” The source said he originally heard that kind of language was used shortly after the incident.

“He had sort of lunged forward – it was unclear from the conversations I had that he actually made physical contact, but he might have. I don’t know,” the source said. “Nobody said Trump assaulted him; they said he tried to lunge over the seat – for what reason, nobody had any idea.”

The employee said he’d heard about the incident multiple times as far back as February 2021 from other agents, including some who were part of the presidential protective detail during that time period but none of whom were involved in the incident.

The source added that agents often recounted stories of Trump’s fits of anger, including the former President throwing and breaking things.

“Not just plates,” the source added, a reference to how Hutchinson testified this week that she saw ketchup on the wall and a porcelain plate shattered on the floor of the White House dining room after Trump had thrown his lunch at the wall upon hearing about then-Attorney General William Barr telling a media outlet there was no widespread fraud in the 2020 election. (our emphasis)

If Malignant Loser acolyte Tony Ornato or any other Secret Service agent who has already provided sworn testimony -- or will in the future -- is found to have lied or been evasive in their account of the Malignant Loser's actions on or about January 6, obviously they need to be removed from their positions and prosecuted.  It's been noted that the January 6 committee wouldn't have let Hutchinson go out on a limb with her account of what Ornato and agent Bobby Engel told her about the events that day without corroboration from other witnesses.  Now, with others coming forward, it's more important than ever to cull the toadies, enablers and liars who remain in positions of authority.

But the key point hasn't been contested:  that the Malignant Loser wanted to go to the Capitol to lead the insurrection but was saved from his own unhinged instincts by some around him.  That's the most damning fact.

(Photo:  Ornato and the Malignant Loser)

Remember that all the toadies (MTG, Boebert, Goetz, etc, ad infinitum) will ALL win reelection. I am thoroughly convinced he will inhabit the White House again.Possibly with some sort of Lifetime appointment by proclamation. Voting won't be necessary as state legislatures will be the electors. What really worries me is if he federalizes the militias. With the militias come the police, with the police come the military. And just for f's sake, he authorizes the churches (certain churches) to act on a local level to identify the BLASEPHEMERS !!! The mind boggles at the possibilities.