Russians "Exhausting Their Capacity" For Further Aggression In Ukraine 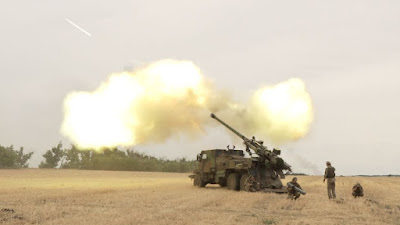 Russian advances in Ukraine have slowed almost to a standstill as newly delivered Western weapons help Ukrainian forces reclaim much of the advantage they had lost in recent months, opening a window of opportunity to turn the tide of the war in their favor again.

Russian troops have made no significant territorial gains since the Ukrainian retreat on July 2 from the eastern city of Lysychansk under withering artillery fire. The retreat gave Russia full control over Luhansk, one of the two oblasts, or regions, that make up the broader eastern Donbas area, and it marked Russia’s only meaningful strategic success since its retreat from territory around Kyiv in April.

The lack of progress may be explained at least in part by the “operational pause” declared by Russia’s Defense Ministry after the seizure of Lysychansk — to allow Russian troops a chance to “rest and develop their combat capabilities,” in the words of President Vladimir Putin.  [snip]

Rather, Barros and many Western officials and analysts suspect that the Russians are close to exhausting their capacity to make further territorial gains as their depleted army confronts Ukrainian forces with newly acquired capabilities. Already forced to abandon their hopes of capturing the capital, Russian forces may soon have to reckon with their inability to conquer the entirety of the Donbas region — the only publicly declared goal of the initial invasion and the focus of current offensive ambitions.

Significant credit is being given to advanced Western weapons, including the American HIMARS rocket system:

“Right now, the Russians are losing the initiative, and the Ukrainians either have it or are about to have it,” Barros said. “The HIMARS are key to that.”

The HIMARS give the Ukrainians the ability to strike almost 50 miles behind Russian lines with a high degree of accuracy, and Ukrainians have used them to destroy more than 100 high-value Russian targets, including command and control centers, ammunition storage sites, and logistics and support facilities, according to a senior U.S. defense official who spoke on the condition of anonymity because he was not authorized to divulge the information.

Most recently, Ukrainian forces have been utilizing the HIMARS to press a fledgling counteroffensive toward the strategically vital southern city of Kherson, which was occupied by Russia in the first days of the war.

This comes amid reports of significant Russian casualties in less than 6 months of war:

Roughly half of the Russian troops initially sent to invade Ukraine are estimated to have been killed or wounded, indicating that the ongoing conflict has enacted a sizable toll on Russia.

Representative Elissa Slotkin on Wednesday told CNN that over 75,000 Russian soldiers have been either killed or wounded since Russia began its invasion on February 24. Slotkin made the remarks after attending a classified briefing on the war in Ukraine with Biden administration officials who described the Russian military as drained.

In the leadup to its invasion of Ukraine, Russia reportedly amassed 150,000 soldiers along the Ukrainian border. Since then, figures on Russian losses have remained nebulous. The new numbers, if confirmed, would mean heavy losses for Russia as Ukraine presses ahead with a counteroffensive.  [snip]

Richard Moore, head of British spy agency MI6, said during last week's Aspen Security Forum that Russia was "about to run out of steam," while Ukraine still enjoyed high morale as it received powerful weapons from Western allies.

"I think our assessment is that the Russians will increasingly find it difficult to supply manpower and material over the next few weeks," he said. "They will have to pause in some way and that will give the Ukrainians opportunities to strike back."

Surging more high- tech weaponry (including aircraft) now will pay enormous dividends in putting Ukraine on the offensive before Fall rains and Winter set in along with a potential battlefield stalemate. The West also needs time to manufacture and re-supply the weapons it's been sending to Ukraine due to the heavy consumption rate of ammunition and degradation of materiel.

But, Ukraine is turning the tide against Putin.  The West must remain stalwart in its military and humanitarian support, and in applying sanctions on Russia, no matter the temporary pain.  It's a small price to pay given what Ukraine is suffering.

(Photo:  A French- manufactured Caesar 155mm self- propelled howitzer; France has given 18 of the highly accurate howitzers to Ukraine/ BBC News)