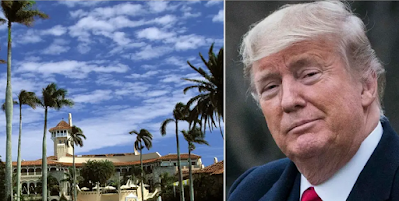 The Malignant Loser's excuse #9 (or is it #11?) for why it was PERFECT to have highly classified documents in his Mar-a-Lago club has been debunked by those who ought to know:

In the days since the FBI seized classified and top secret documents from Donald Trump's Mar-a-Lago resort, the former President and his allies have claimed that Trump had a "standing order" to declassify documents he took from the Oval Office to the White House residence.

But 18 former top Trump administration officials tell CNN they never heard any such order issued during their time working for Trump, and that they believe the claim to be patently false.
Several officials laughed at the notion. One senior administration official called it "bullsh*t." Two of Trump's former chiefs of staff went on the record to knock down the claim.
"Nothing approaching an order that foolish was ever given," said John Kelly, who served as Trump's chief of staff for 17 months from 2017 to 2019. "And I can't imagine anyone that worked at the White House after me that would have simply shrugged their shoulders and allowed that order to go forward without dying in the ditch trying to stop it."
Mick Mulvaney, who succeeded Kelly as acting White House chief of staff, also dismissed the idea and told CNN he was "not aware of a general standing order" during his tenure.

In addition, CNN spoke with former national security and intelligence officials as well as White House lawyers and Justice Department officials. Taken together, their tenure covers all four years of the Trump administration, and many served in positions where they would either be included in the declassification process, or at the very least, be aware of such orders.
Official after official scoffed at the claim Trump had a standing order to declassify documents that left the Oval Office and were taken to the residence.
"Total nonsense," one senior White House official said. "If that's true, where is the order with his signature on it? If that were the case, there would have been tremendous pushback from the Intel Community and DoD, which would almost certainly have become known to Intel and Armed Services Committees on the Hill."   [snip]
Former Trump national security adviser John Bolton called the notion of a standing declassification order "a complete fiction."
"I was not briefed on anything like that when I started as national security adviser," Bolton said on CNN's "New Day" earlier this week. "I never heard of it, never saw it in operation, never knew anything about it."
In addition, Olivia Troye, a former homeland security adviser to then Vice President Mike Pence, called the notion of a blanket declassification "ludicrous." Another former senior intelligence official laughed and said it was "ridiculous."
And a source familiar with White House records and declassification said Trump's claim was "laughable" and that if any such order existed, it was "Trump's best kept secret." (our emphasis)

Time to throw some more hamberder and ketchup against the wall to see if anything sticks.
(Image:  "You want another bullshit excuse? I got more!" /Getty Images)
Posted by W. Hackwhacker at 9:00 AM