Across The Universe, Cont. -- Juxtaposing Hubble And Webb Telescope Images 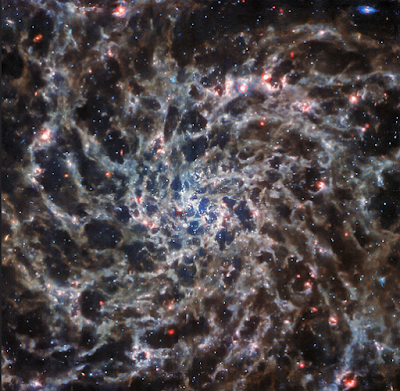 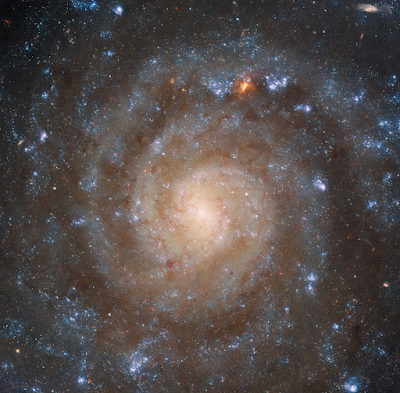 From NASA/ ESA, September 27, 2022:  This spectacular image features the spiral galaxy IC 5332, shown here in unprecedented detail thanks to observations from the Mid-InfraRed Instrument (MIRI), which is mounted on the NASA/ESA/CSA James Webb Space Telescope. IC 5332 lies over 29 million light-years from Earth, and has a diameter of roughly 66 000 light-years, making it about a third smaller than the Milky Way. It is notable for being almost perfectly face-on with respect to Earth, allowing us to admire the symmetrical sweep of its spiral arms.

MIRI is the only Webb instrument that is sensitive to the mid-infrared region of the electromagnetic spectrum (specifically in the 5 µm – 28 µm wavelength range); Webb’s other instruments all operate in the near-infrared. One of MIRI’s most remarkable features is that it operates 33 °C below the rest of the observatory at the frosty temperature of –266 °C. That means that MIRI operates in an environment only 7 °C warmer than absolute zero, which is the lowest possible temperature according to the laws of thermodynamics. MIRI requires this frigid environment in order for its highly specialised detectors to function correctly, and it has a dedicated active cooling system to ensure that its detectors are kept at the correct temperature.

It is worth noting just how challenging it is to obtain observations in the mid-infrared region of the electromagnetic spectrum. The mid-infrared is incredibly difficult to observe from Earth as much of it is absorbed by Earth’s atmosphere, and heat from Earth’s atmosphere further complicates things. Hubble could not observe the mid-infrared region as its mirrors were not cool enough, meaning that infrared radiation from the mirrors themselves would have dominated any attempted observations. The extra effort made to ensure that MIRI’s detectors had the freezing environment necessary to operate properly is evident in this stunning image.

This extravagantly detailed mid-infrared image is juxtaposed here with a beautiful ultraviolet and visible-light image of the same galaxy, created using data collected by Hubble’s Wide Field Camera 3 (WFC3). Some differences are immediately obvious. The Hubble image shows dark regions that seem to separate the spiral arms, whereas the Webb image shows more of a continual tangle of structures that echo the spiral arms’ shape. This difference is due to the presence of dusty regions in the galaxy. Ultraviolet and visible light are far more prone to being scattered by interstellar dust than infrared light. Therefore dusty regions can be identified easily in the Hubble image as the darker regions that much of the galaxy’s ultraviolet and visible light has not been able to travel through. Those same dusty regions are no longer dark in the Webb image, however, as the mid-infrared light from the galaxy has been able to pass through them. Different stars are visible in the two images, which can be explained because certain stars shine brighter in the ultraviolet, visible and infrared regimes respectively. The images complement one another in a remarkable way, each telling us more about IC 5332’s structure and composition.