Sunday Reflection: The Way of Truth and Love 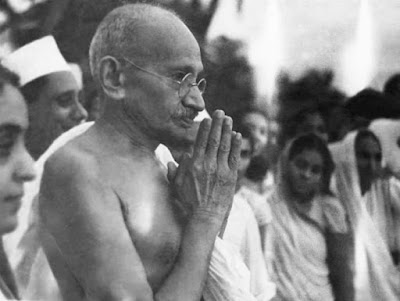 “When I despair, I remember that all through history the way of truth and love have always won. There have been tyrants and murderers, and for a time, they can seem invincible, but in the end, they always fall. Think of it--always.” -- the father of Indian independence and of the non-violent protest movement Mahatma Gandhi, born on this day in 1869. Inspiring such figures as Dr. Martin Luther King, Jr. and Nelson Mandela, Gandhi fought British colonial rule in India through advocating non-violent resistance. India gained its independence in August, 1947, and was partitioned into separate Hindu-majority (India) and Muslim-majority (Pakistan) nations. Gandhi was assassinated less than 6 months later by a Hindu extremist who objected to Gandhi's pacifism.

His teachings are the anthesis of the hubris, extremism and brutality that we see in this country, as the far-right engages in violent behavior to thwart the majority of the people, and in nations like Putin's Russia, as it conducts a war of aggression toward its neighbor Ukraine based on lies.