Trump: Did Sex Trafficker "Say Anything About Me?" 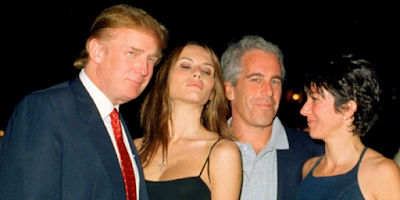 One of the countless insights into the deeply sick personality of the Malignant Loser in his unofficial whisperer Maggie Haberman's new book, "Confidence Man: The Making of Donald Trump and the Breaking of America," was his reaction to the arrest of sex trafficker and Jeffrey Epstein companion Ghislaine Maxwell. According to the Guardian:

"At an Oval Office meeting in July 2020, Donald Trump asked aides if Ghislaine Maxwell, the former girlfriend of the financier and sex offender Jeffrey Epstein who had been arrested on sex trafficking charges, had named him among influential contacts she might count upon to protect her.

According to a new book by Maggie Haberman of the New York Times, Trump asked 'campaign advisers … ‘You see that article in the [New York] Post today that mentioned me?’

'He kept going, to silence. ‘She say anything about me?’  [snip]

"Consciousness of guilt" much?

The story which seemed to worry Trump, according to Haberman, appeared in the celebrity-focused Page Six section of the New York tabloid on 4 July 2020.

It quoted Steve Hoffenberg, an Epstein associate, as saying: 'Ghislaine thought she was untouchable – that she’d be protected by the intelligence communities she and Jeffrey helped with information: the Israeli intelligence services, and Les Wexner, who has given millions to Israel; by Prince Andrew, President Clinton and even by President Trump, who was well-known to be an acquaintance of her and Epstein’s.'” (our emphasis)

Labels: Trump wondered if Ghislaine Maxwell talked about him