Donald Trump’s company was convicted of tax fraud on Tuesday in a case brought by the Manhattan District Attorney, a significant repudiation of financial practices at the former president’s business.

A jury found two corporate entities at the Trump Organization guilty on all 17 counts, including conspiracy charges and falsifying business records.

The verdict came on the second day of deliberations following a trial in which the Trump Organization was accused of being complicit in a scheme by top executives to avoid paying personal income taxes on job perks such as rent-free apartments and luxury cars.

The conviction is a validation for New York prosecutors, who have spent three years investigating the former president and his businesses, though the penalties aren’t expected to be severe enough to jeopardize the future of Trump’s company.

As punishment, the Trump Organization could be fined up to $1.6 million — a relatively small amount for a company of its size, though the conviction might make some of its future deals more complicated.  [snip]

Trump himself was not on trial but prosecutors alleged he “knew exactly what was going on” with the scheme, though he and the company’s lawyers have denied that.

The case against the company was built largely around testimony from the Trump Organization’s former finance chief, Allen Weisselberg, who previously pleaded guilty to charges that he manipulated the company’s books and his own compensation package to illegally reduce his taxes.

The importance of the judgement, which came quickly after it went to the jury, is that it's likely the beginning of the death spiral of the Trump Organization crime syndicate.  It should also embolden and encourage the full prosecution of other cases pending, including the New York State Attorney General's financial fraud civil case and the Manhattan DA's other investigation of Trump & company's dealings with banks and others about the value of his real estate holdings.

Justice, at long last, is beginning to catch up to the Malignant Loser. 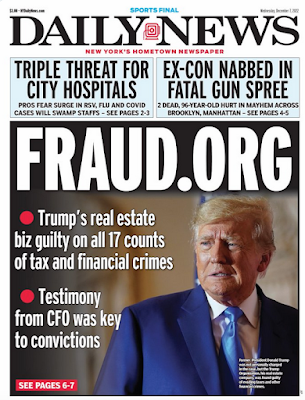 So. . . This is Trump so I do wonder . . . does New York require payment of back taxes plus penalties and then shut the criminal enterprise down permanently or are we talking the equivalent of a slap on the wrist and a stern admonition to "behave"?

Kwark -- the penalty, in the form of a fine, is a nothingburger. However, the conviction on multiple counts of criminal fraud, will make it far less likely the organization will be able to conduct business or get loans from banks or other financial institutions. A slam dunk conviction like this puts wind in the sail of, especially, the NYAG's civil fraud prosecution, where the bar for conviction is substantially lower. It's the first domino to fall.