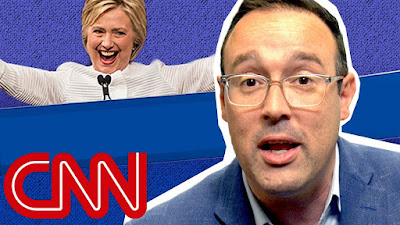 We're sorry not sorry to see you go:

CNN’s Politics Reporter and Editor-at-Large Chris Cillizza has reportedly been let go from the network, where he has worked since 2017 after a long stint as a political commentator at the Washington Post.

At CNN, Cillizza’s “reporting lives under the brand, ‘The Point with Chris Cillizza,’ and includes a nightly newsletter and weekday Amazon Echo and Google Home flash briefings. He also hosts CNN Audio’s ‘Downside Up’ podcast.”

Parker Molloy had this assessment of Cillizza in 2020:

You know how in movies like Freaky Friday, 13 Going on 30, and Big, there are always those scenes where the main character has to learn how to be an adult? They go to an office, they don’t know how anything works, and they generally fumble through the day, ordering things like jelly beans and chocolate milk for lunch while spinning around on a swivel chair? Well, the difference between those scenes and CNN analyst Chris Cillizza’s career is that at least the children in the movies eventually learn to do their job with some level of competence.

Cillizza is, at best, an overpriced embarrassment CNN has chained itself to. He treats politics like a game played for his entertainment, rather than something that affects the lives of everyone in the country. His Twitter feed is a mess of played-out memes that make his reaction to any given event as predictable as a talking doll with a pull string. Though he’s treated as an expert on the American political establishment, his analysis comes with the naivete of a newborn child.  [snip]

The real shame of Cillizza’s success -- during a time when journalism is one of the only checks on power we have left -- is that there are so many talented, hard-working, fact-based journalists who’ve lost work in recent years. Columbia Journalism Review reported in December that 3,160 journalists were laid off in 2019. As we view Trump’s scandals and impeachment through Cillizza’s warped lens, it’s worth wondering how different things would be in our media and our democracy if news organizations rejected the sort of lighthearted hackery he peddles, instead of making it a highly sought commodity...

He was Hillary Clinton- phobic, and was instrumental in puffing up the Republican bullshit narrative about her emails(!).   He was terrible.  Now he's gone.  Please don't come back.

BONUS: A quick look at a few of Cillizza's errant hot takes.

In the Cillizza kitchen, it was a morning tradition: fire up Twitter on the old iPhone over a cup of joe, make baseless, pithy comments about serious matters, then cash a check for millions. But now, the woke mob has taken all that away.

(Image:  cause for rejoicing)