Pics Of The Day: Left Hanging

Yesterday in the U.S. Capitol -- the site of the violent Trumpist insurrection on January 6, 2021 -- members of the U.S. Capitol Police and Metropolitan Washington Police were honored for their service in defending democracy with the award of the Congressional Gold Medal. The families of the fallen police officers were also there to accept the award, including the family of Capitol Police officer Brian Sicknick. However when it came to accepting handshakes from the two Republican leaders, Sen. "Moscow Mitch" McConnell and Rep. Kevin "Qevin" McCarthy, the Sicknick family refused, leaving McConnell hanging and McCarthy with a dyspeptic scowl on his face. Twenty-one of McCarthy's House Republicans refused to vote to award the Congressional Gold Medal to the officers. 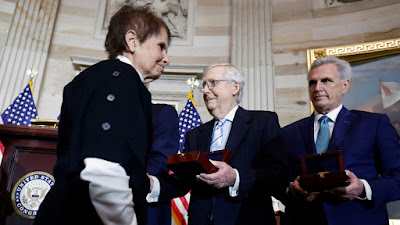 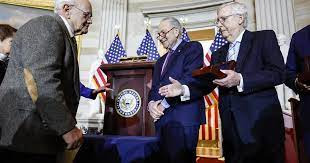