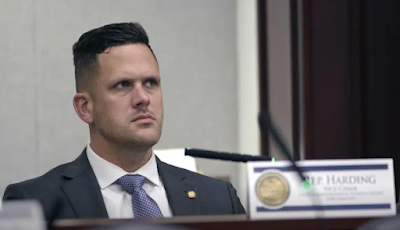 They're all the same.  They just haven't all been caught at something yet, like this light- fingered homophobe was:

Joseph Harding, 35, was indicted on six counts of wire fraud, money laundering, making false statements and other crimes, the U.S. Attorney’s Office for the Northern District of Florida said in a release.

Harding, a Republican whose district is south of Gainesville, allegedly sought Covid-relief loans from the Small Business Administration in 2020 for two companies, Vak Shack Inc. and Harding Farms, according to the indictment.

In applications to the agency, Harding allegedly said the companies had half a dozen employees and gross revenues from the prior year totaling more than $800,000 combined, the indictment says.

The companies had no employees and state records showed they had been dormant in the months before the applications were filed, the indictment says.