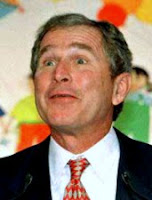 Yesterday's Washington Post reports that during last Saturday's White House/Homeland Security exercise to check on emergency responses in 10 U.S. cities in the event of a terrorist bomb attack, Bush was out taking a bike ride. Well, better than getting photographed reading "My Pet Goat" again. Actually, a more likely explanation for his ride would be that he was role-playing a school boy during the mock attacks. And he would do just fine in that role.
Posted by Hackwhackers at 9:17 AM