Putting the "Vice" in Vice President 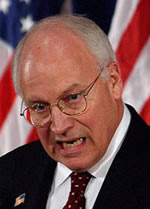 Steve Clemons' account of Dirty Dick Cheney's manueverings to provoke hostilities against Iran is chilling. Aligned on one side, favoring diplomacy, are Secretaries Rice and Gates, CIA Director Hayden, and Dep. Sec. of State Negroponte. On the side of attacking Iran are Cheney and his neocon acolytes. The disturbing element of the story is that Cheney is deliberately narrowing the choices being presented to the Presidunce to steer him toward war, because he's lost confidence in Bush to make the "right" decisions (no surprise there). A former intelligence official calls this undermining of the diplomatic initiative by Cheney potentially "criminal insubordination" (no surprise there, either, coming from the crew that cooked up the rationale for attacking Iraq).
He and Johnny Walnuts will be singing "Bomb Bomb Bomb Bomb Bomb Iran" together any day now.
Posted by Hackwhackers at 7:49 PM