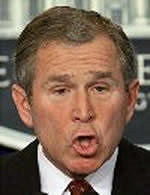 After viewing most of the Preznit's news conference today, regarding release of the interim report on (non-)progress made toward benchmarks for the Iraqi regime, please allow us a few moments of frustrated venting. Here goes:

This privileged, deeply ignorant, smug, destructive, murderous cardboard cutout of a man, who was unfortunately elected (after once being placed) into the presidency, is so profoundly out of touch that his only reality is the completely discredited Cheney/neocon rhetoric whistling through what passes for his brain. We now know this malevolent moron was told by the director of intelligence that the Iraq war could not be won because the Iraqi regime could not function as a government... in late 2006! Then came the Iraq Study Group's report, which the Assministration ignored. Now, even when it's clear that the Iraqi regime won't meet its already watered-down benchmarks by September (even in the Assministration's generous grading, 8 were deemed "satisfactory progress," 8 were unsatisfactory, and 2 were "mixed"), Dumbya insists on mouthing the same idiotic rhetoric he's been told to mouth for the last few years.