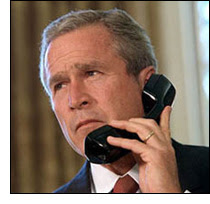 News that the Presidunce is embarking on a new Israeli-Palestinian peace initiative has to cause concern among those who actually want peace in that region. The ever-bungling Dumbya has messed up nearly every foreign policy initiative he's touched, and U.S. prestige in that region is at the lowest ebb in history. The Presidunce will attempt to bolster Palestinian leader Mahmoud Abbas with aid - - which will certainly make Abbas popular among his fellow Arabs to see him in Dumbya's embrace. A few press conferences featuring Dumbya's famous tortured statements and this process will be history.
(photo: The Presidunce using his "cordless" Middle East hotline phone.)
Posted by Hackwhackers at 10:42 AM