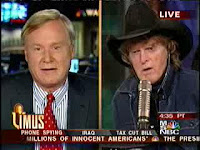 Almost every broadcast of Hardball showcases Chris "Tweety" Matthews' unerring cluelessness about women. Either he's yukking it up, making demeaning remarks at Hillary Clinton's expense (while giving fawning ass kisses to Rudi McRomney or Good Ol' Boy Fred "Aqua Velva" Thompson), or he's leering at female guests, correspondents, etc. It's not an occasional occurence, either; it's a continuing problem of his.
This goofy, arrogant loudmouth got a major gig on a cable network not by any discernable journalistic skills, but by ass-kissing the right people along the way at the right cocktail parties. Eventually, he's bound to have his Imus moment on the air, and then we'll be able to wave goodbye to Tweety. The moment can't come too soon.
Posted by Hackwhackers at 11:17 AM