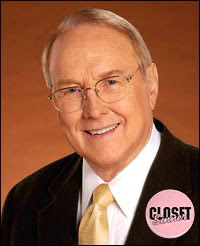 Fred (Huckleberry) Thompson won't be getting the key endorsement of wingnut evangelist James Dobson for his presidential bid. Dobson, in a note to his friends, said the reasons were Thompson's failure to support a Constitutional amendment to ban gay marriages, his support of McCain-Feingold campaign financing reform, and the fact that Thompson "can't speak his way out of a paper bag." Dobson, the head of "Focus on the Family", is a leading American Taliban-gelist.

Praise the Lord, and pass the Pepto Bismol, Huckleberry!

(photo: Dobson, the closet sinner)
Posted by Hackwhackers at 11:15 AM