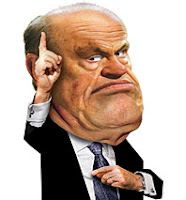 In one of the most anticlimactic announcements ever in American politics, Fred "Huckleberry" Thompson announced last night on the Tonight Show that (drum roll, please) he's running for President! Of course he's been all over the country in the past 8 months "testing the waters" and putting on his best "good ol' boy" act. Huckleberry missed participating in last night's Rethuglican presidential debate in New Hampshire, which is an early indicator that he'd rather duck than debate. He was known during his one term in the Senate for avoiding work if at all possible, so it's no surprise that this actor and former lobbyist wants to coast during the primaries.

Once the hard campaigning begins, Huckleberry won't be able to rely on the stale platitudes and folksy bromides that characterize his TV ads and speeches. He's got a lot of rust on him, and, judging from his history, he's not inclined to remove it.

(illustration by Darrow, NY Magazine)
Posted by Hackwhackers at 8:25 AM