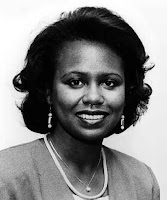 In an op-ed piece in today's New York Times, Anita Hill responds to Justice Clarence "Injustice" Thomas' angry, self-serving smear of her in his new book, "My Grandfather's Son." Thomas continues to misrepresent Hill's character and motivations in the section dealing with charges of sexual harrassment in his troubling Senate confirmation hearings in 1991, and Hill knocks them down in her article. Thomas is not only the most reactionary justice on the Court today, he is widely viewed as the most right-wing since the early 1930s. According to Jeffrey Toobin's book "The Nine," Justice Scalia was asked what the difference was between his and Thomas' philosophy. Scalia reportedly said "I'm a conservative, a textualist, and an originalist, but I'm not a nut." Nut is right, and an angry one at that.
Posted by Hackwhackers at 10:05 AM