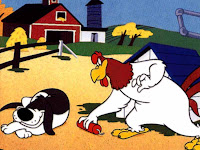 "Foghorn Leghorn" Thompson can't quite grasp reality, can he? In an appearance before a small group (becoming smaller with each day, hopefully), he insisted that Iraq had weapons of mass destruction before we invaded, despite even Dumbya's own admission that they didn't have them. That case was closed years ago, and virtually no one (even most Rethugs) disputes the fact the the WMD justification for war was hollow. Kind of like Foghorn's "haid."
Posted by Hackwhackers at 3:32 PM