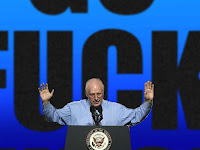 Recent reports indicate that Dead Eye Dick has been surpressing a National Intelligence Estimate on Iran because it doesn't conform to his road map for war. The report, which has been held up for over a year, won't be released by the Cheney clique simply because it contains dissenting views on Iran's nuclear capabilities and intentions. Think Progress' article has a nice comparison of how this approach is identical to the manipulation of intelligence prior to the Iraq invasion.
Posted by Hackwhackers at 1:50 PM