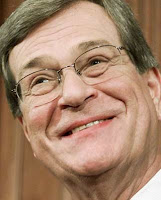 Sen. Trent "I'm Going To Make A" Lott (Rethug-MS) will be announcing he's leaving the Senate before the end of the year, according to news sources. Lott, as Minority Whip, is the #2 (pun intended) Rethug in the Senate. It's believed he's leaving the Senate now in order to avoid more stringent future lobbying rules that would inhibit him from cashing in almost immediately on his Washington connections. His seat is not believed to be in any jeopardy for the Rethugs since Mississippi ranks last or near the bottom of all states in most social, economic and educational categories, and thus is prime Rethug territory.

UPDATE: The Onion has man on the street comments.