Hillary Goes for an Oscar 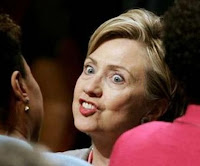 The day before the event, Hillary Clinton is making a strong case for a Best Actress Oscar. If this isn't the most transparent, contrived, embarrassing tripe ever spoken in a campaign, we'd like to know what is. Note the faux anger, the attempt to put Obama in the "Rove playbook" camp, attacking Obama while decrying attacks on fellow Democrats. This is so shameful and so dishonest that one can only conclude that the teary show of unity at the last "debate" was yet another piece of acting by this increasingly shrill, erratic candidate and her campaign. No, shame on YOU, Hillary!
Posted by W. Hackwhacker at 8:21 PM