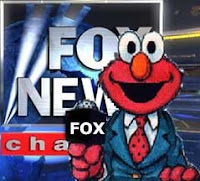 In this morning's WaPo, Wanker Extraordinaire Howie "Wowie" Kurtz (who is married to Rethug consultant Sheri Annis* -- what a surprise!) has a huge wet kiss for Faux News anchorette Megyn Kelly. Howie waxes on for about 4 columns about Kelly, portraying her as a budding anchor superstar. Here's a sampling of what Howie thinks is evidence of Kelly's anchor superstardomness:

"On this particular morning [the senior producer] tells Kelly that she may need to do an unexpected interview with Sen. Charles Schumer on the economy. During a break, Kelly e-mails a couple of financial analysts for suggested questions. But, she says, 'I generally try not to know too much about complex financial news, because then you try to conduct an expert interview. Our viewers aren't experts.'"

First, on that last sentence: no shit, Sherlock. Second, why would you want to have knowledge get in the way of your interviews when uninformed opinion will do just fine?!

Better yet, just check out The Daily Show's John Oliver's Fox smackdown, featuring Ms. Kelly and many of Faux's "news" trolls. It is wonderful beyond further description, and a far more "fair and balanced" view of Faux News than you'll ever get from Howie.