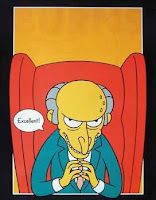 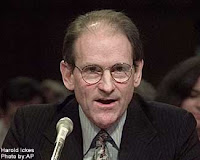 The physical similarities between evil mogul Montgomery Burns and political hatchet man Harold "Icky" Ickes are striking. Anyone catching Icky's performances yesterday at the Democrats' Rules and Bylaws Committee weenie roast and the talking heads shows this morning knows that the physical similarities are only the beginning. You get the notion that these angry kamikazes for Clinton - - Icky, Lanny Davis, Howard Wolfson and Terry McAuliffe - - had their West Wing offices picked out earlier this year, and realize now that their dreams of glory are toast.

Sadly,it's not hard to imagine that the Clintons' unstated goal now is to conduct procedural fights up to and during the Democratic convention, and, while outwardly giving support to Obama, working behind the scenes with their kamikazes to make sure that Obama loses in November. Then the Clintons would say "we told you so", and position themselves (yes, themselves) for another run at the Presidency in 2012.

UPDATE: The Atlantic's James Fallows has a similar take here.
Posted by Hackwhackers at 3:13 PM