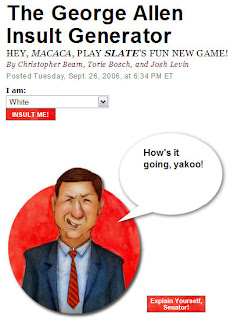 That's not a misprint. Tomorrow in Fairfax, VA, former Sen. George "Macaca" Allen will kick off the Rethuglicans' minority outreach efforts - - likely to a sparse crowd. Macaca Allen never recovered from being caught calling a minority "macaca" at a campaign rally, and compounded it by later grudgingly admitting that his own mother was Jewish ("I loved her pork chops, and she made ham sandwiches"), as if it was something to hide.

His appearance is bound to convince minorities that the GOP is the place for them ("Welcome, macacas. And you too, wetbacks, chinks and towel heads!").
Posted by Hackwhackers at 9:23 AM