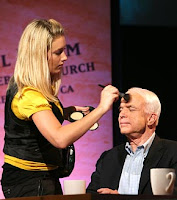 Us Magazine has the story that Sen. Maverick McPretty has been using American Idol makeup artist Tifanie White to cover those age spots. She got over $5500 in August alone, so there's no telling how much she'll collect as McPretty nears the Nov. 4 finish line. "More makeup, faster, faster."

Remember what McPretty said in 1992 after his wife pointed out that his hair was thinning? "At least I don't plaster on makeup like a trollop, you c**t." Look who's talking.