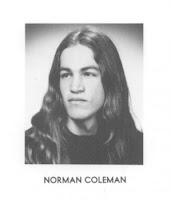 "Landslide" Norm Coleman (Rethug-MN) may have more than a contested recount to be worried about. Several outlets are reporting that the FBI has opened an investigation of some of Coleman's financial dealings which had been reported during his campaign for re-election. At issue is money that a wealthy Texas friend passed through to Coleman via an insurance company for which Coleman's wife works.

(Photo: No, not Norm Coleman's wife; it's Norm "Don't Bogart That Illegal Payment" Coleman!)
Posted by W. Hackwhacker at 2:21 PM