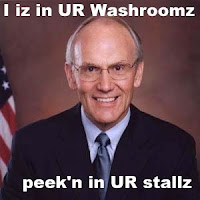 Former Idaho Rethug Sen. Larry "I'm Not Gay" Craig has dropped any further appeals of his arrest for disorderly conduct stemming from an undercover sting in a Minneapolis airport bathroom. Prior to his 2007 arrest, stories persisted for years about Craig's soliciting sex in bookstores, Washington's Union Station, and other places.

What's in Craig's future (in addition to a messy divorce and a pair of leather chaps)? He plans to form a consulting company. Maybe he could team up with Mark Foley and Ted Haggard to provide advice to public figures in the closet about how to say "I'm not gay" with a straight (heh heh) face.
Posted by Hackwhackers at 10:45 AM